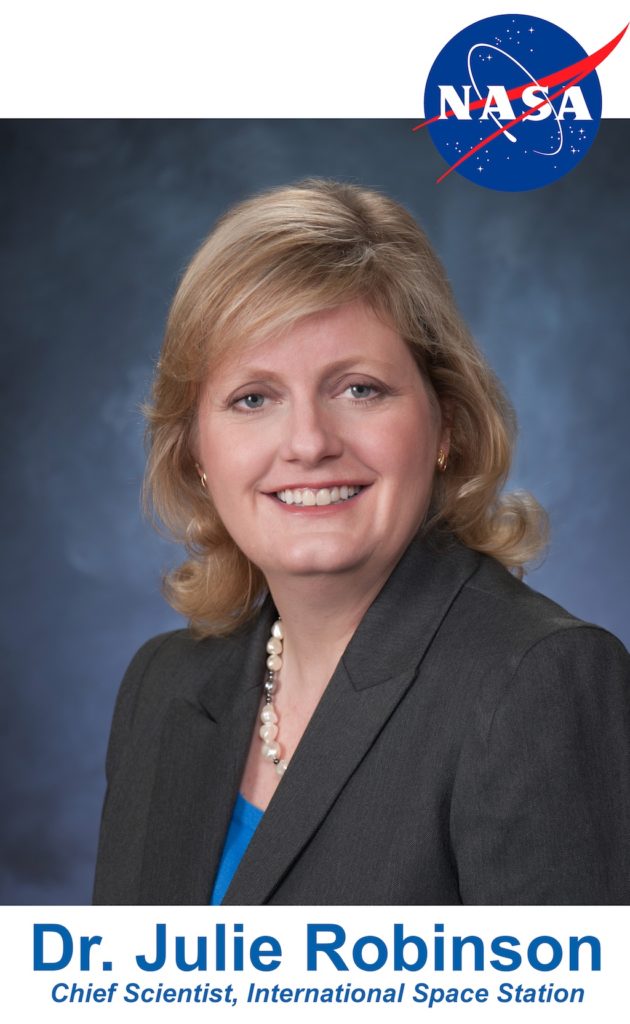 The Charleston Area Alliance will welcome Dr. Robinson, Chief Scientist of the International Space Station (ISS) as its Elevations Professional Women’s Network Luncheon speaker on Thursday, October 19, 2017. Robinson will describe how the ISS supports research across fields as diverse as astrophysics, nanomaterials, combustion, microbiology and human psychology and highlighted some of the research facility’s most dramatic discoveries. Over the years NASA is responsible for thousands of patents and new technologies. Register here.

Robinson counts her experience as a delegate in 1985 at the National Youth Science Camp, located near Bartow, West Virginia, as vital in helping contribute to her successful career. Since attending as a student, Robinson has stayed connected to the STEM program by volunteering as a member of the faculty to encourage these young future science leaders.

“We were proud to honor Dr. Robinson and recognize her impressive career which includes service as Chief Scientist of the International Space Station,” said Dr. Andrew Blackwood, executive director of the National Youth Science Foundation. “Dr. Robinson places great value on her time in West Virginia as a delegate to the National Youth Science Camp and returns frequently to teach and encourage the next generation of STEM leaders.”

As the chief scientist for the ISS, Robinson has overseen the transition of the laboratory from the assembly period, with just a few dozen active investigations, to full utilization, with hundreds of active investigations. She represents all space station users, including NASA-funded investigators, the community of investigators using the station as a National Laboratory, and the international research community.

The ISS facility is an engineering marvel, flying 254 miles above Earth’s surface, home to the only U.S. National Laboratory in a microgravity environment. The 356-foot-long space station has six resident crew members representing a variety of nations, and ground teams around the globe that stand ready to support station activities on a daily basis.

Our mission is to inspire lifelong engagement and ethical leadership in Science, Technology, Engineering, Arts, Mathematics, and related professions through its proven educational model for mentoring, challenging, and motivating students.